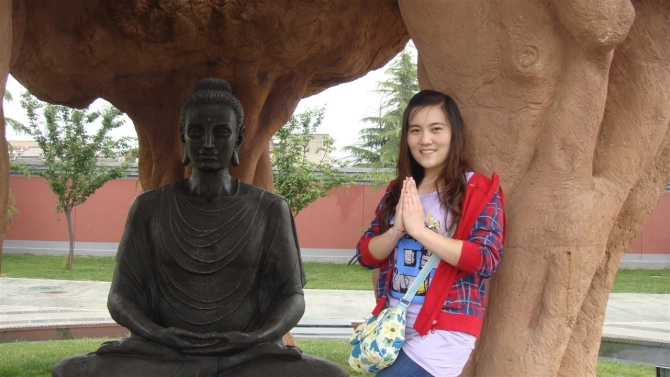 Pick you up in time at Xian airport. A paper board with the sign of your name will be held high at the airport exit. Then transfer to hotel; the rest of day is free at your own leisure.

The Terra cotta Warriors and Horses: It is one of the most significant archeological finds of the 20th century. The ‘underground army’- 6000 life-size painted terracotta warrior and horses individually sculpted from real life models and arranged in battle formation have been protecting the mausoleum of the first emperor in Chinese history- Emperor Qinshihuang for 2,200 years.

Big Wild Goose Pagoda: A well-preserved ancient building which is a holy place for Buddhists.

Maoling Mausoleum: The tomb fo Emperor Han Wudi of the Western Han Dynasty (206BC-8AD). It is grand in scale  and over 230 pieces of rare cultural relics were excavated out, such as the gold-plated copper horses, copper warming stoves, all of which are now on dislay in the Maoling Mausoleum Museum.

Famen Temple: Famen Temple is a Buddhist Monastery with a history of 1,700. There was a pagoda which fell down in the rain and revealed a 1000 year old undergound vault filled with 2,400 treasures including gold and silver utensils, precious textiles, pearls, porcelains as well as religious items. He shi Buddahist Pagoda was built there in May 2009 and is the tallest Buddhist pagoda in the world.

Finish the last day in Xian by visiting  the Ancient City Wall, Forest of Stele Museum, Muslim Street, and Shadow Play in the Gao Courtyard. Be transferred to Xian airport afterwards.

Ancient City Wall: One of the most complete city defensive system in the world. The wall has watchtowers, ramparts, wall gates, compared to a similar function of Great Wall in a certain way.

Muslim Street: Located in the Muslium quarter,  the 500 meters long avenue paved by bluestones are dotted with many pecular stalls, souvenir shops, cafe and bars which are mostly run by Muslim people.

Shadow Play in the Gao Courtyard: Shadow Play is a traditional folk art : beautifullly made flat puppets whose shadows are projected onto a white screen  are manipulated to make a story-telling performance accompanied by Chinese musical instruments. The play is performed in Gao Courtyard, a traditional Chinese dwelling.

* High Season: April 1-October 31, Low Season: November 1-March 31.
* Discount for children from 2 to 12 years old differs according to your tour size.
* If you are a group of 10 or 10 people above, please contact us, we could give a very competitive   discount.
* If you need to prolong your stay in Xian, or arrive a few days earlier, please let us know and we’d    be happy to  extend your hotel bookings, or arrange additional tours for you.